doing some character work, which includes the fun task of interviewing Paolo Romaldo.  imagine my glee when I discovered this gem of a video on youtube:

ha ha, Dani Osvaldo talking about his tattoos and his favorite music.  apparently he is planning to have all the characters from Pink Floyd’s The Wall tattooed on his left arm.

so here is an excerpt from my interview with Paolo, a work in progress.  PR = Paolo Romaldo, I = Interviewer.

I: You’re quite involved with youth football charities, both here in Torino and in your home city of Napoli.  Can you tell us why that’s so important to you?

PR: I started playing football when I was quite young—three years old, I think.  I had a modest upbringing, and only because of the funding of the youth leagues was I able to get the start that I needed.  I’ve never forgotten that.  Particularly now, with the economy the way it is in Italy, giving children the opportunity to learn to play at a young age in a safe environment is one way I can give back.

I: That’s a lovely sentiment.

PR: Well, we’re trying to make it more than just sentimental.  Ideally, it will change the lives of these children and also improve the caliber of football in Italy by growing talent at a young age.

I: Do you want to have children yourself?

PR: Of course I want children!  I’ve always imagined a big family, three or four kids at least, coming home for dinner every night and seeing them lined up down the dinner table.  I love kids.  But I can wait a little longer, I want the situation to be right, obviously.  I wouldn’t want to have four kids with four different women.

I: [coughs] It seems you and Francesca are on the right track, though.

I: What’s one thing our readers will be surprised to learn about you?

PR: Surprised to learn about me?  That I love the opera.  I have season tickets to La Scala.

I: I’d seen photos of you and Francesca at opening night, but I had assumed that was her doing and not yours.

PR: No, no, it was the other way around.  I’ve loved the opera since I was a kid.

I: That is very surprising.  If you weren’t a football player, what would you be?

PR: I don’t know.  I’d never considered anything else.  This is what I was meant to be.  If it all changes tomorrow, I don’t know, a racecar driver.

inspiration #31 : writers who believe in writers.

I’m at RWA (the annual conference of the Romance Writers of America) this week and I’ve been amazed by how inspirational the sessions have been.  I’ve thought of myself as a writer since, oh, probably seventh grade, but working a day job and facing the harsh realities of life often make it challenging to envision oneself living the dream.  today I had the truly wonderful opportunity to hear Cathy Maxwell give the keynote address at the conference.  she spoke candidly about attending her first conference, and the moment when she acknowledged that she had “this thing inside” her that needed to be manifest–the desire to tell a story, and to write.  for me, and I imagine for many of the thousands of other attendees, it was a validation of the late nights, furtive scribbled notes, and impractical trips using valuable vacation days through which we try to realize this thing inside.  dear reader, I cried.  and my heart soared to be in the company of so many women from so many different walks of life who are pursuing this calling. 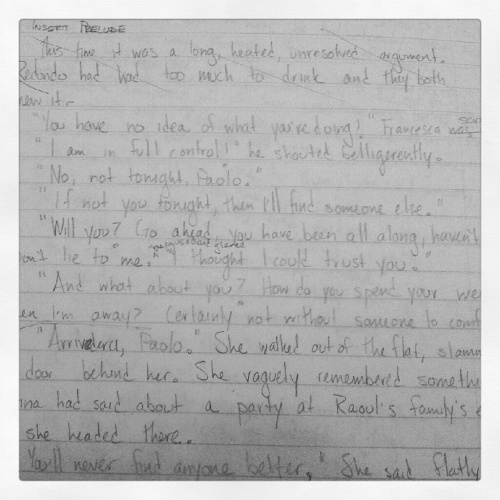 returning to the long-lost draft of my teenage years…I had a weird, puritanical idea that Francesca should be relatively innocent regarding, of all things, alcohol.  yeah.  she sucks dick like a champ but she’s never done tequila shots.  riiiiiight.  and on the flip-side of that coin, Paolo, a professional athlete, had a tendency to become drunk and a little abusive.

I needed a way to start a fight between the two of them, and in my youth and inexperience I made several assumptions:

a) the man would be the one to stray

b) but it wouldn’t be his fault

c) because he was a victim of alcohol

d) and alcohol would also make him act out towards her

e) though she may harbor repressed rape fantasies, his drunkenness was no excuse for abuse

I’m proud to have accrued enough life experience to know that women cheat, women drink, and women are sometimes the ones who disturb shit for themselves.  it’s important to me to write Francesca as that kind of character; for all that’s difficult to relate to in this story–the shoes, the paparazzi, the men with consistently erect penises–I want her to be someone not unlike one of us.

it’s not the years, it’s the mileage. 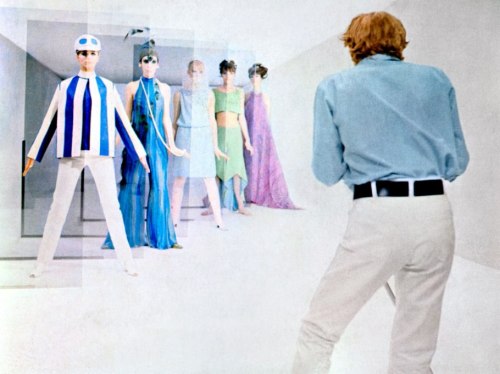 my favorite director, hands down, is Michelangelo Antonioni.  I think I’ve written before about his “alienation trilogy” (L’Avventura, La Notte, and L’Eclisse) starring the ridiculously gorgeous Monica Vitti (oh, wait–I haven’t written, but I’ve pinned).  anyway.  the films are a bit heavy, but also breathtakingly beautiful, which I think is why I like them.

in 1966 Antonioni made his first film in English, in swinging London, about a photographer (modeled after David Bailey, parodied by Austin Powers) living the dream–wild parties, naked or half-naked women wandering around his studio / flat, drugs, sweet cars.  the film is Blow-Up, critically-acclaimed and Antonioni’s first commercial success.

it’s an English film by an Italian director about a fashion photographer.  you can rent it streaming on Amazon.  enjoy! 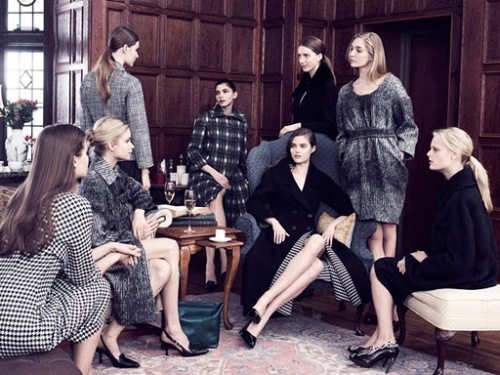 I love emphasis on fabrication and tailoring–which have been cornerstones of Raf Simons’s work at Jil Sander.  This campaign is shot so beautifully…