“How are you feeling?” he asked.

She shrugged.  “I’m ok.”  She reached over for his hand, twining her fingers in his.  “You mean about that?”

“I think I’d like to see you go at it with Tomasi again,” she grinned.

“Why?  Why is it ok for the two of you to watch us eat each other out but it’s not ok for you to kiss?  Because you’re men?  Because it threatens your masculinity?  Because you’re afraid it would make you gay?”

“I didn’t enjoy it, that’s all.  If I’m going to make out with someone, I’d rather it was you,” he said defensively.

“Or Natalya,” Francesca replied.  “You didn’t seem to have a problem with her.”

“We were all doing it.  We were all just really turned on.  Yeah, it was exciting having her there.  It was exciting watching her with you, and Tomasi with her, and you with Tomasi.  It wasn’t exciting for me to touch him.  I’ve known him since we were kids, it was just weird.”

“So you wouldn’t want to do it again,” Francesca said.

“I’d want to be with you and another girl again,” he answered cautiously.

“I really don’t know if I could do that.  Maybe if it wasn’t someone I already know.  Or I wouldn’t mind if Tomasi just watched tonight.”

Francesca looked away from him and back at the sea.  “I don’t want him just to watch,” she said.

“But you do want to do it again, then?”  Paolo sounded surprised.

“You keep saying we’re on vacation,” she said.  “We might as well, right?”

“I kind of wish you could be more or less enthusiastic than ‘might as well,'” he answered.  “Did you enjoy it?  Was it good for you?  You seem to be totally ambivalent.”

“You want to know?”  She paused.  If she told him the truth, how many other truths would she feel like she needed to tell?  How would he look at her differently?

She looked at him.  “We had a lot of wine, we were pretty high.  I think there were a lot of variables that made it a particular opportunity.”

“You’re not answering the question.”

“I loved it.”  There.  She had said it.  “I know it sounds strange, I didn’t expect it.  I’d never been with a woman before, really.  And trading off between her and you and Tomasi, it was amazing.  I felt a million different things at once.”  She had been watching Paolo as she spoke, and he looked adrift.  She quickly added, “But it made me so grateful to be with you.  It was exciting with them, sure, because it was different.  But you know how to make love to me.  All the time.”

Natalya went inside to bring another bottle of wine and Tomasi followed her.  When several minutes had passed and they hadn’t yet returned, Francesca turned to Paolo.

“I wonder if everything’s ok,” she whispered.

“I’m sure,” Paolo replied, “but you can poke your head in and check if you’d like.”  Curiosity overcame her and she did, opening the screen door about six inches and looking inside.  She almost called out Natalya’s name, but saw movement through in the kitchen.  There was Tomasi pressing Natalya against the refrigerator, his back to Francesca, his hands pushing up her sundress and feeling up her breasts.  Francesca stayed and stared, she wasn’t sure how long it had been when Paolo joined her.

“What’re you looking at?” he whispered, standing behind her.  She didn’t reply, and he saw what she was watching soon enough.  She was sure he could feel her pulse racing, and she knew for certain when he reached around to her, grabbing her tits from behind and pulling her into him.  He kissed her neck as he played with her breasts, and she rotated her hips against him, feeling his growing cock against the small of her back.  Tomasi was devouring Natalya, he had pulled the straps of her sundress off her shoulders and underneath she was braless; her small, perky tits, the ones they had all seen during their topless beach activities, Tomasi had attacked them, taking each one into his mouth in turn.  Natalya had her hand in his shorts and was stroking him slowly and evenly.  She opened her eyes and saw Paolo and Francesca standing in the doorway.  With her free hand, she gestured to them to come in.

vacation, part two : a day at the beach. 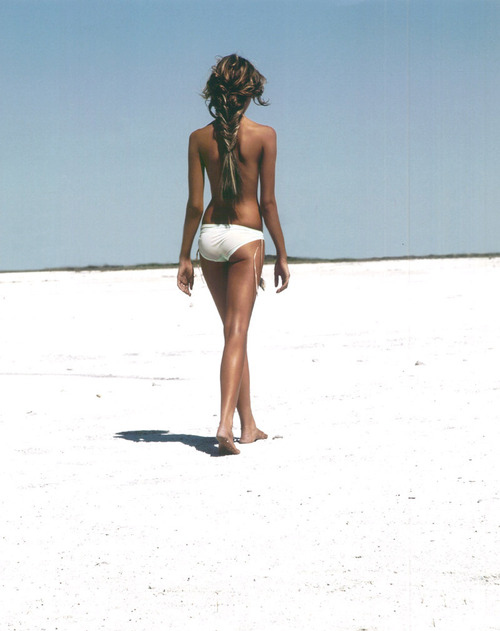 They had a paddleball set and were volleying back and forth in the sand.  Natalya sat up and watched them for a moment, shielding her eyes from the sun with her hand.

“Boys,” she said, shaking her head dismissively and reclining again.

Francesca watched for a while longer.  Both men were in perfect physical shape.  Tomasi was a little taller than Paolo, and he liked to pretend to serve Federer-style, stretching out to his full height and smashing the ball.  He was slightly slimmer than Paolo, too; where Paolo’s body was muscled Tomasi’s was leaner.  He had tattoos–it seemed they all did–but his were tribal armbands and a fierce-looking gladiator on his back right shoulder.  She found her eyes drawn down to his swim trunks, and she studied them, too, or rather, what she imagined was beneath them.  Natalya was no fool, she was liberated and open with her sexuality.  They probably had a fantastic sex life.  He was probably hung like a stallion.  She felt her cheeks flushing just as Paolo noticed her watching and waved at her.  She waved back, then turned over and returned to her book.

A little while later, Paolo and Tomasi walked back to them, dripping wet from the ocean.

“We’re going to take a walk and bring back some lunch,” Paolo said, toweling off cursorily.

“Anything special you want?” he asked.

“Nope, whatever you choose is fine for me,” she said.  “Thanks, babe.”

“I want something low-carb and high-protein, with no sodium added,” Natalya said.  Tomasi spanked her ass with the paddleball paddle.  “Ouch!” she yelled.  “You know I’m kidding.”

“Of course I know,” Tomasi said.  “You’re a beast.  You eat everything.  I just wanted to smack you,” he grinned.

Francesca felt herself flushing again, the heat rising up from her chest to her face.  She was glad Paolo was wearing his dark aviator sunglasses so her eyes wouldn’t have to meet his.